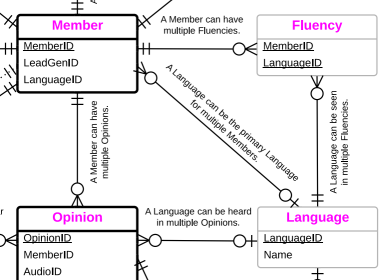 I'm a bit embarrassed to admit that I had forgotten at least one important part of the AboutTh.is database: language. Then again, I guess the entire point of the database design process is to tease out issues like this earlier than later, so, it's all good.

I guess in theory, the web application doesn't really need to know what language is being spoken, but still....

Unlike country codes, (which still aren't exactly etched in concrete), languages (and the definitions thereof) have been quite fluid over time. After a bit of sniffing, it would seem that the "right" standard to use (out of several) is ISO 639-3. I'm certainly not going to have AboutTh.is get embroiled in the whole "what is a language?" debate, and so I'll just take the attitude that, if it's in ISO 639-3, it's good enough for me. Thus, I'm open to Esperanto (epo), Yiddish (yid), and even Klingon (tlh). :-)

Unrelated, I'm pretty annoyed at Freelancer.com, which just acquired vWorker, (nee RentACoder / Exhedra / Planet-Source-Code / etc.). With absolutely no advance warning or any regard for the community (which was in the hundreds of thousands, I believe), the site started randomly breaking over the weekend before any notification was made that vWorker is being torn down completely and all data is being summarily ported over to Freelancer. In this day and age of transparency, there was absolutely no reason why they couldn't've done this in a far more user-friendly fashion, and cause far less stress. After all, I've paid vWorker hundreds, and possibly thousands of dollars over the years, and presumably there are other places I could take my money. (eLance or oDesk, perhaps?) They're going to have to work pretty d*mn hard to win my respect.
Collapse