Getting a lot of things done, but still want to move faster.

Outsourcing the preparation of a second physical mailing for SafeAmericanKids.com.

Outsourcing the research for data field lengths and rules for things like social networking usernames and profile picture sizes. I want certain aspects of AboutTh.is to match those of other social networking sites. e.g., I want to know about user/member name rules, so that if someone has a certain name in Twitter, they can claim the identical name at AboutTh.is, without compromise.

I'm also looking to fine-tune a few minor aspects of the AboutTh.is database schema. I guess that's always going to be an ongoing process.

Got some inspiration and wrote two pages of specification for the AboutTh.is logo design. I feel a lot more confident about that now. Here's a quick excerpt of the introduction:

What logo needs to communicate:

In mid-2010, I had aspirations of launching a charitable initiative, and had bought a domain for it, ManyHands.org. I never was able to get very far along with that, although Google.org has since stepped into the space that I had been considering. In the last few days, an unrelated charity, also named Many Hands, approached me, and we negotiated terms to transfer the domain to them. Looks like their new site just went live.

Speaking of logos, I had also commissioned a graphic artist to create a logo at the time, and he had spent over a month getting every detail just right. The message that I was trying to communicate was "many hands reaching in to support each other, and reaching out for support from others". (See below.) I added rights to that work into the deal, although I have no idea if they intend to use it.

Considering posting a few services for sale on Fiverr, although I'm not convinced that doing so is an efficient use of my time.

I need to get back to work porting Accountify from PEAR::DB to PDO. 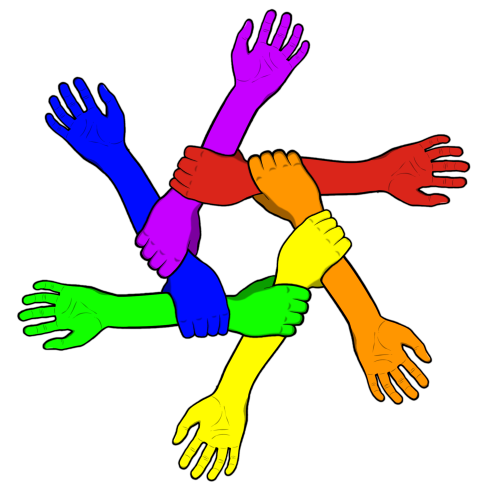